I got to spend some time with Irene recently and she speaks often of Jeremy. At times she actually becomes him. In doing this, she shows such a joy for life and it’s coming straight from Jeremy. She impersonates him. It’s really amazing to hear his voice coming through her and to see this amazing little man's personality. That his voice is heard at all is no small miracle. His tongue was nearly cut completely off. Jeremy, just 2 years old at that time, was playing and accidentally knocked over and broke the family television.

When his father arrived and was informed he hit Jeremy with an uppercut to his jaw which almost entirely severed his tongue. Jeremy was taken to the hospital and his nearly severed tongue was reattached and the father was arrested. Sadly such cases of domestic violence are common in the slum of Kibera and almost always it's women and children who bear the brunt of the suffering. While the tongue was saved unfortunately the injury was far worse. Nerve endings within the brain were also severed causing brain damage, this was unknown at the time.

The mother in law pleaded with Jeremy’s mom to drop the charges against her son. She argued "if he goes to prison how will you survive? It is he who is paying the rent and for the food." Jeremy’s mom dropped the charges and now the father took to beating Jeremy and treating him cruelly. Jeremy’s mom suggested she move back to the village to allow him to cool down. When it came time to return the father suggested he take only the daughter back and that she keep the other two children. She was not happy about this and came to meet with him only to discover he had already left her, having taken a new wife.

This left her homeless and without support.

There is no welfare system in Kibera, no safety net and very quickly the four found themselves left to the street. Someone took pity on them and offered them a small room to occupy until a better situation could be found. This wasn’t even the standard 10 x 8-foot dwelling common in Kibera, rather a small structure that housed a very large water tank. There was barely room within to fit let alone live comfortably.

Unemployment in the slum is over 50% and even those who find work often do so in the context of what is called “day labor”. Jeremy’s mom was out searching for this and left the three children, Jeremy 4, Alex 1 and their older sister (just 7 years old) alone. The girl decided to light the small cooking kettle sitting on the floor to cook some food and the paraffin oil spilled and caught fire. She grabbed a blanket and covered herself rather than fleeing and sadly she died in the fire. Jeremy and Alex were outside playing at the time and survived the tragedy. Jeremy’s mom was again left to the street and homeless now suffering from the death of her daughter.

Without a place to stay the Children’s Welfare office intervened on behalf of the children and brought them to Kibera Pride. Jeremy was able to speak very little, he was, as Irene described him, "a wild child”. Jeremy cried a lot, he would strike the other children and even took to biting them. Even for the staff at Kibera Pride, they too were being bitten. Irene expressed grave concerns about our ability to keep and manage such a child. He was taken to the doctors to see what was wrong and this is when we discovered he had brain damage.

Tuesday, March 31, 2015:
Irene: “Daniel, today I went to the hospital for Jeremy and it is so discouraging, The MRI is 17,000 kes and because he can't follow the instructions. They have to inject him to sleep so that they can put him in the machine without disturbance. And the injection is 13,000 kes”. Daniel: “Irene, please don't worry about the cost - we will manage somehow”.

Diagnosing Jeremy required several doctors visits and multiple procedures. This expense would be greatly exceeded by the treatment and ongoing therapy. Even the need for a special school and special transport. These continue to present really challenge for us. While the children’s welfare office drops off children (often with special needs like Jeremy) they provide no funding.

For us, it has been a struggle to manage Jeremy’s needs, but we are now receiving so many rewards. He’s speaking now and he's no longer a wild child. It seems a miracle and it is true that with the right therapy and approach young children can recover from brain injuries. Jeremy’s mom is still trying to get on her feet and still trying to make a life in the slum. She’s not ready to take back her two children yet, but we are working with her and we are hopeful. She does visit her kids and she is so deeply grateful, seeing for herself the incredible change in Jeremy. She has cried many times expressing both gratitude for what we have done for Jeremy and surprise at how he has improved.

For all the extra expense and challenge and even for feeling so much apprehension and discouragement at first, we have learned not to give up. We all take such  pride in Jeremy. We are confident he will be a great man one day and we are so thankful and blessed he came into the Kibera Pride family. Truly the greatest challenges we face often hide the greatest joys - it just requires endurance. 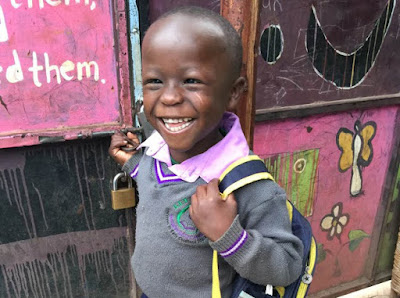 Posted by Daniel Brevick at 6:16 AM No comments:

Kibera Pride is a non-profit, registered NGO with a mandate to provide foster/home care for the most vulnerable children of Kibera and to provide and facilitate social services and community development within the region. Our organization is located in the Kibera SLUM on the outskirts of Nairobi, Kenya.

The organization's services are open to all, regardless of gender, religion, tribe or race as long as they are among the most vulnerable in the society. Kibera Pride is focusing on providing education, food, shelter, clothing and other personal needs to the less privileged children.

“The people who are crazy enough to think they can change Kibera are the ones who will!” - Chiat Day